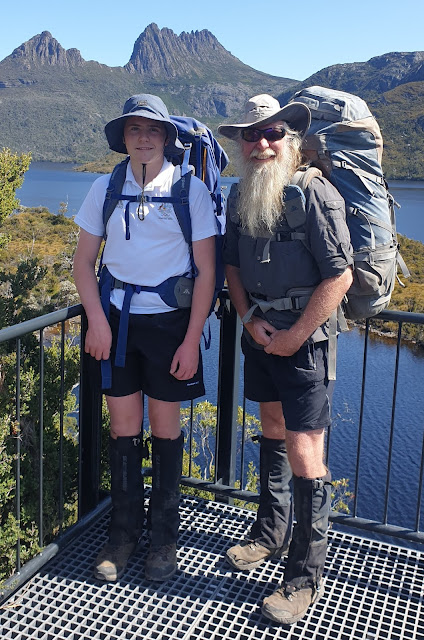 If there was an origin for my bushwalking, it's the Cradle Mountain area.  The first walk I can remember was the old Dove Lake circuit before the lake level track made it the tourist-friendly doddle it is today.  I was four years old.  Amazingly mum and dad were also hauling my two younger siblings on the epic journey through the Ballroom Forest, up past Lake Wilks and returning over Hansons Peak.
But my story starts even earlier than that.  My dad was on a Burnie High School geology excursion to Cradle looking at the effects of glaciation on the landscape.  This got dad into bushwalking, a passion he shared liberally with friends, my mum and, eventually, my siblings and me.  Countless journeys to Cradle were a feature of my youth, adulthood and, most recently, my own parenthood journey.  Like my father before me, I also shared the experience with anyone willing to join me.
I've had many memorable trips introducing my own family to Cradle.  Winter tended to be the best time with snow trips being a favourite.  Many nights were spent in Waldheim Cabins and the Scout Hut (BP Lodge) and many real estate (and occasionally election signs) were ridden down the slopes.  Emily was the first of my three to reach the summit, a super achievement at the ripe old age of eight.  She looked a darn site more comfortable on the climb than an ashen-faced prime minister we met on top. He composed himself just enough to shake Emily's hand and say, "Hi.  I'm Kevin from Queensland."
This time, in January 2020, it was time for my youngest child, Henry, to tackle some summits.  As a North West Coaster I'm still coming to grips with being a Hobartian since 2014 so I struggled with the 5-hour journey up from the south.  We hopped aboard the shuttle, pleased to experience one of the big, new, hybrid Volvos doing the run.  While our government is hopelessly addicted to poker machine revenue and insists on propping up old growth logging, it does get a few things right.
Just before 4pm we finally hit the track.  The gorgeous sunny day meant plenty of tourists were still milling about so it was easy to find a willing photographer to take our happy snap at Glacier Rock.  Very soon lake circuit walkers were left behind as we made our way steeply up Hansons Peak.
Lakes Hanson and Dove sparkled below us deep in their steep-sided, U-shaped, glacier-carved valleys in contrast to the plateau-dwelling tarns and Twisted Lakes which we passed close at hand.  In the distance behind us kettle holes and rim pools pocked the Ronny Creek valley beyond Lake Lilla.  Ahead we could see Lake Wilks with its seemingly impossible perch midway up Cradle's lower slopes - another feature of glaciation.  We could easily play a game of geomorphology buzzword bingo up here.
Just before 5:30pm we decided we could cope with a late arrival at Lake Rodway as the Little Horn looked oh so inviting.  Leaving the quartzite plateau the Face Track took us through a band of conglomerate before we took the obvious pad towards the climbing gully between classic dolerite columns.  Smithies Pinnacle made an impressive spectacle along the way but beyond our climbing ability at that point in time.  (As I write this, Henry has recently got heavily into climbing so perhaps it is now within his capability.)
The Little Horn detour took an hour and a further hour delivered us down the hill past the unusually dry Artists Pool and Flynns Tarn cascades to arrive at Scott Kilvert Hut at 7:30pm.  With Waterfall Valley Hut being reconstructed Overland Track walkers were being detoured to Lake Rodway for their first night so the hut and tent platforms were all full.  We backtracked a little to pitch our tent on flat, glacially scoured bedrock - that's what I call a hardened tent site.
The forecast for our middle day spoke of cloud increasing and afternoon rain so an early start was in order.  By the time sunrise greeted us as we were already climbing out of the Rodway valley to join the Overland Track at the northern end of Cradle Cirque.
Our time on the world-famous multi-day trail was short lived as we avoided it's descent along the arete (Bingo!) into Waterfall Valley.  Instead we continued onto the Barn Bluff track as it continued along Bluff Cirque.  All the way up the ascent of Barny the skies stayed clear for us but we could see ominous cloud building from the east.  That's not the prevailing direction in these western mountains but also not terribly uncommon in the summer months.  East coast lows can lurk in the Tasman Sea and bring 'unseasonal' conditions which have been known to famously upset yacht races and cricket matches as they scoop up moist air from the tropics and loop it down to the drier, temperate climes further south.
From the summit of this, Tassie's fourth highest mountain, we were treated to clear views west and south.  The large expanse of Lake Will dominated to the south and led our eyes to the smaller lakes of the Windermere Plains and, beyond that, the Pelions which include two more of Tassie's top five tallest peaks, Mounts Ossa and Pelion West.  To the north Cradle was just starting to be gobbled by the approaching easterly.

Two cirques and a lightly-forested sub-alpine traverse of Cradle's western face later we were, once again, scrabling up dolerite boulders towards a columnar skyline.  The false summit, dip over the back and final climb were dispensed with in quick succession before attaining Tassie's 5th highest summit.  Gaps in the fast-moving cloud offered fleeting glimpses directly down the sheer 400 metre drop a few short steps away from the historic summit cairn.
It's a close call which way is best to walk from the Cradle summit track back to Lake Rodway.  We opted for the Face Track to complete our circumnavigation and arrived at our tent just as the rain started getting serious soon after 4:30pm.
As a rainy evening turned into a rainy night and rainy morning the roar of the stream tumbling from Flynns Tarn down to Lake Rodway steadily grew.  By the time it was light the stream was a raging torrent.  From a 7:15am start we made a morning tea stop in the Little Horn Emergency Shelter at 8:30 and were ready for the shuttle bus at 10:00.  Along the way it was amazing to see the before and after effect of the downpour.  Waterfalls were pumping all over, especially above Flynns Tarn and Lake Wilks. 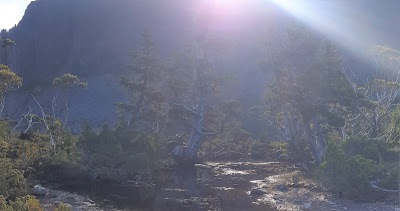 Flynns Creek and Artists Pool before and after the rain
On the way home to Hobart we stopped briefly at Dasher Falls.  Despite the short distance between Cradle and Sheffield there had clearly been way less rain.  While lacking in water, the rock formations make these falls well worth the visit in any conditions.